Sasuke Uchiha is a ninja with many talents. He belongs to the Uchiha clan. He was born with the visual Kekkei Genkai, known as the Sharingan. These eyes are incredibly powerful. They allow the user to read the movements of others and copy their techniques as well.

How did Sasuke get the Rinnegan

It was an evolutionary process. Sasuke got the Rinnegan when he talked to Hagoromo Otsutsuki inside his subconscious. It was the moment when Sasuke was in a near-death state. But fate was still making way to revive him through Kabuto. Kabuto gave a portion of his body to heal Sasuke. They were talking and asking Sasuke about his goal. At this moment, Hagoromo saw that he and Naruto could change the world and prevent Kaguya from taking over. As a result, Hagoromo granted him the Yin half of the Six Paths chakra. And the other half of the seal to end Kaguya once and for all.

Sasuke Uchiha is known for his talent as a ninja. His trademark, Sharingan, made him unique and powerful. He was famous among Naruto Shippuden and the rest of their friends. He was hailed as a genius when he was a kid.

His Sharingan gave him unique visual abilities. The evolution of his eyes into the Mangekyou Sharingan and eventually to the Rinnegan was stunning. It unlocked his special powers. It made him one of the strongest ninjas.

Sasuke Uchiha is the second and youngest son of Mikoto and Fugaku Uchiha. They named him after Sasuke Sarutobi. They had hopes that he would become as strong as a shinobi. Sasuke grew up under the influence of his older brother, Itachi. Sasuke himself adored Itachi. He never passed up an opportunity to spend time with him.

When Uchiha Sasuke entered Konoha Ninja Academy, he proved to be the best in his class. He consistently got top grades. But, he could never meet the same milestones Itachi had set. As time went on, Itachi became distant and cold towards their family. Sasuke did not understand the basis for this behavior. At that time, his father began taking an interest in his development. He taught Sasuke how to perform the Great Fireball Technique. Sasuke mastered the technique in a week. Fugaku felt pride in Sasuke for this achievement. He also encouraged him not to follow in Itachi’s footsteps.

One night, Sasuke returned home after a long day of training. He found the streets littered with the bodies of the Uchiha. He came home to notify his family of this Uchiha Clan Massacre. But he found Itachi standing over the bodies of their parents. Sasuke tried to call for help and comfort from Itachi. But he responded by using Tsukuyomi to torment him with visions of murdering their family.

Sasuke was alone now. After the massacre, he spent the first few days wandering his family’s compound. Then Sasuke decided to do what Itachi had instructed. He dedicated his life to vengeance, having no other interest than bringing about Itachi’s death.

He threw himself into his studies. He made no efforts to form friendships and ignored all the girls’ attempts to gain his affection. One of his classmates, Naruto, disliked Sasuke’s incredible personality. He developed a one-sided rivalry.

Sasuke was usually annoyed by his outbursts but would, at times, secretly smile at how hard Naruto worked because of him. Ironically, Naruto was the only person among his peers who understood Sasuke due to the painful events and experiences.

According to Hashirama Senju, Sasuke resembled Izuna Uchiha. He has black eyes. He was considered very handsome. His hair was spiky black with a blue tint. Sasuke’s hair was long. As he got older, his hair covered more of his face. After getting his Rinnegan powers, Sasuke grew his hair to cover his face’s left side, especially the eye.

Sasuke’s clothing has changed many times throughout his life. But the Uchiha clan’s crest was usually present on his clothing. He wears a navy blue, short-sleeved shirt with a high collar in Part I. He wore black during the Chūnin Exams’ finals. He also wore a blue-clothed forehead protector with his outfits.

In Part II, Sasuke consistently wore dark blue pants, with a blue hanging cloth covering his stomach to his knees. He secured it with a purple rope belt. He replaces this top with a sleeveless dark grey shirt and the arm guards with bandages on his wrists during his battle with Itachi. He changed his clothing again after Itachi’s death. He started wearing a white zippered, high-collared, short-sleeved shirt and blue wrist warmers. He also wore a hooded cloak over his clothing at different points.

At the end of the Fourth Shinobi World War, Sasuke lost his left arm. In The Last: Naruto the Movie, he wore a black high-collared shirt, a midriff-exposing flak jacket, and light blue pants.

At the start of Boruto: Naruto Next Generations, the color scheme of Sasuke’s outfit was revised. His long-sleeved shirt gains light grey cuffs. He wore a fedora hat to hide his identity. Sasuke sported an eyepatch over his left eye when he didn’t wear his fedora to conceal his Rinnegan. Here read about does Sasuke die in Boruto?

Why Does Sasuke Have One Rinnegan?

People wonder why Madara got two Rinnegans with him. On the other hand, Sasuke only acquires one. The main reason why Sasuke only got one Rinnegan was that Hagoromo Otsutsuki gave him half of his Six Paths chakra. It was the Yin portion of the powerful chakra. He did this because two people are needed to seal Hagoromo’s mother, Kaguya. It will be revived by Madara as an unexpected result of his plan.

Sasuke was given only half the power of the Six Paths. The other Yang half was given to Naruto. That’s why Sasuke’s only one eye evolved into the Rinnegan. Despite being one eye only, it was still powerful enough to provide Sasuke with a set of special abilities. The Rinnegan gave him the powerful abilities to:

Some fans say that if Hamura were around that time and gave Sasuke or Naruto the other half of the seal, the result would not be the same.

The method by which Sasuke Got His Rinnegan

The method by which Sasuke got his Rinnegan is to be directly approached by the sage of six paths. And he received the Yin half of his chakra.

When Madara Uchiha stabbed Sasuke, it sent him to Sage of Six paths ( Hagoromo Otsutsuki). At that point, Sasuke was given Six Paths Chakra. It turned his eternal Mangekyou Sharingan into Rinnegan.

Sasuke got Sage Chakra from Sage of Six Paths Partially. It was used only to awaken one Rinnegan instead of two.

Sasuke met Hagoromo (Sage of Six Paths ) telepathically (Unlike Madara). Hagoromo decided to give Sasuke half of his power. The other half of it was given to Naruto ). That’s why only one of his Mangekyou Sharingan turned to Rinnegan.

Why does Sasuke have 6 dots in his Rinnegan?

The six dots on Sasuke’s Rinnegan represent how charged his powers are. The dots disappear if he uses his Rinnegan too much.

Though the manga series does not state specific reasons why Sasuke has these dots, we can guess.

The dots in Sasuke’s Rinnegan may represent his ability to use his EMS.

Or Sasuke Rinnegan may have dots as it is a successor of Sharingan.

There is also a possibility that Kishimoto gave dots to Sasuke’s Rinnegan, which signify his Uchiha Clan lineage.

Did Sasuke lose his Rinnegan in Boruto?

How Did Sasuke Get His Rinnegan Back? Does he need it?

Sasuke does not get his Rinnegan back. If he gets his Rinnegan back, it will boost his current power level. But it will not happen. The reason is he is not the protagonist of the show now. It is said that Sasuke’s powers and all the Uchiha abilities come from Shinobi’s blood. So, Sasuke has all the skills of Rinnegan within him. He was the descendant of Indra and only needed a tool to access it. Sasuke can create an artificial Rinnegan as well.

Why is Sasuke’s Rinnegan different? How did he Awaken it?

Sasuke’s Rinnegan is different from the normal Rinnegan. It has three tomoe. Tomoe is present on its two innermost circles to make six.

The other reason why Sasuke’s Rinnegan is different is that he did not naturally awaken it. It was a gift from the spirit of Hagoromo to him. At that moment, he was in a near-death state. His already awakened Eternal Mangekyou Sharingan changed into a Rinnegan. Sasuke retained all of its original abilities and the new ones after getting Rinnegan.

FAQ – How did Sasuke Get the Rinnegan

Why did Sasuke get the Rinnegan and not Naruto

What is the most powerful eye in Naruto

Tenseigan is the strongest eye in Naruto and stands in the first position. It means ‘The Reincarnation Eye.’ It has a blue color and a white floral around it.

Tenseigan is possessed by moon residents, including Hamura Otsutsuki and his descendants. But anyone from Hyuuga Clan can activate it. They combine the pure Byakugan eye with the Otsutsuki chakra to activate it.

Tenseigan is the most powerful genjutsu. It gives control over gravity and the moon. A Tenseigan user can become powerful enough to crash the moon with the earth. He can generate a new organism with its powers. It also gives control of life and death.

It enables its users to fly and control the truth-seeking balls associated with the Sage of Six Paths. The Truth-seeking Balls are made of all Yang chakra natures. Its holder can provoke the giant statue that fought Kurama in Naruto.

What happened to Sasuke’s Rinnegan?

He also lost his god-level status after losing the Rinnegan. Momoshiki stabbed Sasuke’s Rinnegan as it was an obstacle to defeat in his previous battle.

How Did Sasuke Get The Mangekyou Sharingan?

Mangekyo Sharingan is a powerful eye technique. It will occur when the user has a high level of anger and hatred bottled up.

Sasuke got the Mangekyo Sharingan when he defeated his older brother Uchiha Itachi. He was a ninja of the village. Itachi died due to his illness during his fight with Sasuke. After his death, Obito revealed the past of Itachi to Sasuke. Sasuke realized that Itachi was a good person. And he sacrificed his life for the sake of the village.

Sasuke also came to know that Itachi was ordered to kill every member of the Uchiha clan, including his parents. But he couldn’t kill his younger brother. It gave a sudden surge of anger and emotion to Sasuke. These strong emotions awakened Sasuke’s Mangekyou Sharingan. Itachi joined Akatsuki to spy on the Akatsuki after killing everyone. Then Itachi sacrificed his entire life for the village. It made Sasuke angry. 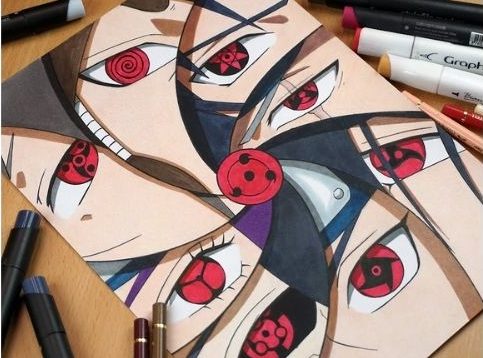 Can Sasuke deactivate his Rinnegan?

Sasuke Uchiha is one of the strongest character in fiction. He was from the manga series and anime franchise Naruto.

When Hagoromo gives Sasuke half of his powers, Sasuke is seen with his Rinnegan active. So now the question is, is this by choice or because he can’t turn it off?

At first, Sasuke was unable to control it fully. Just like his Mangekyo Sharingan, he had to struggle with getting used to it. So, it seems the Rinnegan comes with a lot of complications.

Madara, who was the original wielder, was able to deactivate it. But Nagato can’t do so since he was not an Uchiha. It means that Rinnegan can be deactivated. It’s just a matter of skill and mastery over it.

Final Words – How did Sasuke Get the Rinnegan