The Lotus Flower is usually white or pink, which grows in water gardens and pools.

These beautiful flowers originate from Australia and East Asia. The eye-catching white or pink lotus sprout in the morning and fall in the afternoon.

They cannot survive cold or harsh weather and usually reside in warm sunlight.

What Does a Lotus Flower Tattoo Meaning?

White lotuses are very special in many parts of the world. They are commonly known as Flowers of the Buddha.

Every lotus flower color has its significance and connotation. None is better or worse than the other.

So it’s a matter of personal choice and taste to pick some specific color for the lotus flower tattoo.

What do Lotus Flowers Symbolize?

The lotus flower has unique attributes and meaning. It symbolizes growth and purity as it comes out clean from the murky water and a dirty pond.

It has different meanings and representations in different countries and religions. Most commonly, it represents determination, courage, beauty, and purity of mind.

What is a Lotus Flower Meaning Spiritually?

The spiritual meaning of the lotus is different in many cultures.

In Eastern religions, it symbolizes purity, self-reformation, enlightenment, and rebirth.

Its characteristics often correspond with the human condition: having roots in muddy water produces the most beautiful flower.

Each religion has its associations with the lotus flower. It represents life and existence in Buddhist religions.

The mud is the challenges and obstacles we face in our daily life while the flower symbolizes overcoming those barriers.

This development can be perceived as a continuation towards righteousness and the path to enlightenment.

Buddhists also see the flower as a symbol of purity, self-cleaning, rebirth, and transmigration.

The Lotus is associated with profitability, fertility, and beauty in Indian religions.

This aquatic plant lotus is also associated with several Hindu gods, including Lakshmi, Brahma, and Vishnu, known for charm and beauty.

Some other gods, having association with naturalness and divinity, are portrayed with lotuses in the artwork.

Some Hindus also associate the lotus flower with creation because they believe that the world bloomed into creation in the presence of consciousness, just like the Lotus blooming with sunlight.

Bhai Gurdas Ji, an influential Sikh figure and writer, used the lotus flower as an analogy for living a life.

These publications are referred to use as keys to understand Gurbani and to learn the basics of Sikhism.

They believe that one should stay uninfluenced by the world’s evils, just like the locus remains unsullied in the water.

Other meanings of the Lotus in Sikhism can be considered the same as the general symbolism of the Lotus.

However, it is worth noting that the lotus flower is not commonly used as a Sikh symbol today.

The lotus flower is not a major religious symbol of Jainism, a faith focused on self-sufficiency, but it is a symbol for some Jains.

The Blue Lotus is a powerful symbol of Nami, the 21st Jain, while a red lotus represents the 6th Jain, Padmaprabha.

Naturally, the lotus flower has many beautiful colors. Hindu religion primarily uses the white-colored Lotus, while Buddhists use many lotus colors with their symbolic meanings.

The white flower is commonly known as the matrix of the world and represents the purity of the mind and soul. It also represents Bodhi, which is a state of enlightenment.

The red-colored Lotus represents the heart which symbolizes pure love, compassion, and empathy.

The true Lotus of Buddha is pink in color. Coming from this title, the pink-colored lotus flower represents the history and antiquity of Buddha.

The beautiful gold-colored Lotus signifies that true spiritual enlightenment has been achieved.

The eight-petal purple lotus flower is depicted as devotional and mystical because of its association with the path of self-awakening and incitement.

Lotus in Jewelry and Fashion

Nowadays, the Lotus remains one of the most admired symbols in jewelry and fashion.

The lotus flower is often used in pendants, rings, earrings, and bracelets to symbolize beauty. Some people keep this beautiful flower as a charm.

The image of the lotus flower can be styled in many ways, including as a closed lotus bud or an open bloom.

These flowers are commonly used in Buddhist or spiritual jewelry. The lotus jewelry also makes a great gift idea.

As a gift to someone coming to maturity, it’s a reminder to stay sensible and genuine to oneself while aiming higher.

For someone struggling hard and going through difficult situations, the Lotus symbolizes overcoming adversity and hardship while keeping one’s spirit intact.

As a romantic gift, the Lotus represents the firmness to hold onto your relationship and the readiness to grow together.

Fertility and the Cycle of Life

The lotus life cycle is interesting. It is not just a flower that grows and dies in a day or two. It emerges and resurrects, having a symbolic meaning that makes it fascinating.

It grows in muck, yet its beauty is beyond doubt.

You have to sow the seed to start the germination process. After some days, you will notice a sprout and seedlings.

Eventually, you would see a plant. After that, a beautiful flower will emerge.

Because of its daily process, it holds the spiritual meaning of life, death, and rebirth.

The lotuses love the sun and heat to reach their fullest bloom.

They can grow in partially shaded situations. The water temperature must be warm between 75 and 87 degrees.

Water Lotuses flourish in warm climates, requiring at least 5 to 6 hours of sun a day.

The iconic Lotus is the national flower of Egypt. In Egyptian culture, the Lotus represented resurrection.

This meaning was derived from the Lotus’s petals that open out above water upon absorbing the sunlight and closed during the night.

A lotus flower tattoo in Hinduism shows the world that you are liberal and open-hearted.

Different types of Lotus Flowers and their meaning

The following are the most common types of lotuses:

What does Lotus Flower meaning in Christianity

The lotus flower has different interpretations and explanations in different religions and cultures. One of them is spirituality, and another is piousness.

Christianity-wise, the water lily replaces the Lotus, in the name. It is related to the Mary in the Bible, who is considered the queen of paradise.

The flower can represent rebirth, the ideas of creation, spiritual enlightenment, and the resurrection of life.

Where Do You Put A Lotus Flower Tattoo?

Lotus tattoos can be placed anywhere on the body. Tattoos of lotus flowers have an extensive list of meanings and are usually very personal tattoos.

Therefore their most common placements are the foot, the back, or the arms.

What is so Special about the Lotus Flower?

Nothing is more spiritual than the Lotus because they experience impeccable origination every single day. The Lotus doesn’t seem to have anything bad.
That’s why they are special in many religions and cultures.

The Lotus’s ability to sprout in dirty waters indicates the sign of purity as it grows in the murky pond and still blooms. It’s an ideal example of beauty as well as purity and positivity.

Lotus flower grows above and shows the meaning of cleanliness, simplicity, and taintless, flawless and unblemished.

As per the Buddhist culture, the lotus flower means new beginnings. It also means righteousness, purification, peace of mind and body, goodness, and enlightenment.
The lotus flower represents a link to tangible things.
Each flower has its meaning and significance, so Lotus also holds meaning in Buddhism and other religions

Why is the Lotus Flower Sacred?

The Lotus flower is considered sacred because many Hindu gods portrayed this beautiful flower. One of the three major gods Brahma in India, can be seen sitting inside the white lotus flower.

What it means in Spirituality and Religion

The Lotus has its place in several religions, particularly in the East. The lotus flowers in Hinduism represent determination, courage, and overcoming adversity.

Lotus flower spiritual meaning incorporates both self-awakening and achieving enlightenment.
So, this is a powerful flower to meditate on as you expand your spiritual practice.
The lotus flower represents the ability of everyone, no matter their origins, to reach enlightenment.

Why are lotus flowers so important to Japanese culture?

In Japanese culture, the lotus flower exemplifies purity of the body, speech, and mind, as derived from Buddhism.
The lotus flower flourishes through murky water then pops up to float on the upper surface.

The pretty, aromatized flower signifies wisdom and naturalness. They can often be seen in ponds and lakes near shrines and temples in Japan during summer.
It’s said that nothing is more sacred and enchanting than a lotus flower. 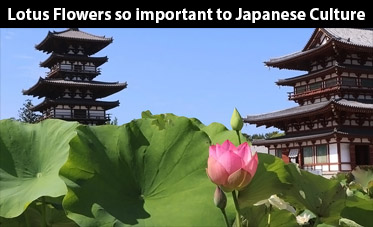 The lotus flower generally depicts all humans’ responsiveness and the correlation we all have with the universe.

They are sacred flowers because of their beauty and the long history of existence that they have had, and everything they represent.

According to the research on a lotus flower, one can comprehend how the mind works, how the ego comes and goes, and how the association should be removed just like the dirt rubs off from the lotus flower.